Desdemona and the Deep: A Stand-Alone Novella

I find myself making this announcement a lot, but it’s worth it, and the internet is a vasty place, so here we go again:

Desdemona & the Deep is actually a standalone novella. Tor.com is marketing it as such.

The first two stories set in the Dark Breakers world I self-published. Now, they did go on to have a life beyond my little Amazon ebook experiment in reprints–to my great joy and surprise! But the ebooks are out of print now, by my choice, though you can still find the reprints in one of Rich Horton’s Year’s Best anthos, and in one of Lightspeed Magazine‘s ebooks.

This is obviously confusing to people. I apologize for the confusion—it’s a goblin market, after all!

Before Desdemona was written, I had originally conceived it as third in a series, but that was when I was still planning on one day self-publishing it. After I wrote it, it was obvious that Desdemona was a different beast entirely (not a romance, for one) (twice as long as either, for another), and had a chance at something bigger.

When that became evident, I spent a lot of time and effort (and had both my agent and my editor, who hadn’t read the other stories, look at it closely) editing it to be a stand-alone novella.

So again, Desdemona was indeed written to be read as a standalone book. Eventually, I’ll put the other two stories back in print, after I’ve fixed some of my earlier errors. But I don’t think they’re necessary for you to enjoy Desdemona as is.

And I really don’t want Desdemona, as a new book, to languish because readers think they must read the first two stories before they take a chance on her.

THANK YOU FOR READING! 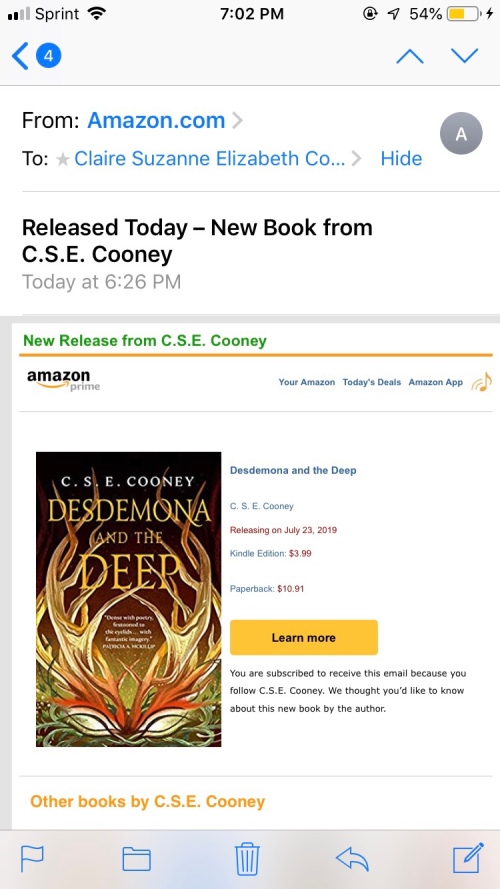