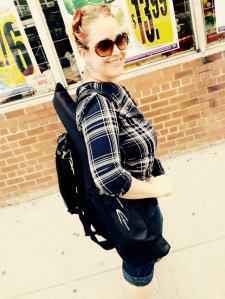 Imaginary Rockstar carrying REAL travel guitar. (Not my own.) (Alas.)

Let’s see, let’s see. Today is Sunday. We did, in fact, record an EP over the weekend.

Jeremy arrived on Friday morning at LaGuardia Airport (United). He was supposed to have arrived on Thursday night, but storms over New York had many planes cancelled and rerouted, so he spent the night at his Denver layover, playing his travel guitar with the stethoscope plugged in, so no one could hear him but himself.

It’s the most CUNNING INSTRUMENT. I love it. He let me carry it when we went to fetch him, and I felt like REAL (and not imaginary) ROCKSTAR. It almost makes me want to learn how to play guitar JUST SO I CAN OWN ONE!

Then what happened? Oh, yes. We came home and started recording. We did four on Friday and four on Saturday, and let me see if I can remember the order… (NOT the “ordure” although I was recently reminded of that word.)

The boys at work. Carlos figuring out midi percussion on the fly.

My word, as I type this, it has just started raining in Queens, New York. Just outside my window.

Now! I have written my list (below), and will ruminate on some of the difficulties/joys of each (below that). If you are interested in reading the lyrics of these songs so you kind of know what I’m talking about, you can find them published at Mythic Delirium! BECAUSE MIKE ALLEN IS AWESOME! 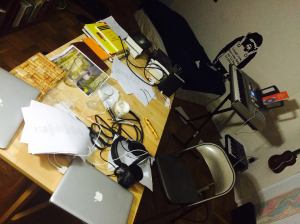 O LOATHLY ONES: This was HARD. It’s sort of a relentless poem-song in 3/4 time, and many of the musical phrases are SIMILAR but not THE SAME, and I know that’s how I wrote it, and Jeremy was very good, when setting instruments to the melody and fine-tuning it (har, har) about not changing it. But as I was TRYING to sing it CONSISTENTLY I realized that perhaps it was the WORST I IDEA I EVER HAD, because it’s not very INTUITIVE to sing without SHEET MUSIC. Ah, but Jeremy has a great music program called… (looking it up in text messages) LOGIC 9 and managed to print out the sheet music derived from the midi-keyboard file. So THAT was awesome. Things got a little easier. Barely.

MOCKINGBIRD AND KESTREL GIRL: This one, methought, would be SO EASY–because Remi (Jeremy) and I sang it one million times last year when we went on our BACT mini-tour with the Goblin Girls. It, uh, wasn’t as easy as I thought. NONE OF THIS WAS!

But!  The GREAT thing about “recording to a click” (the metronome) is that even if Remi goes in later and replaces all the rough guitar and music-y bits with a final, polished version, he can fit our voices in easy-peasy. His original rough melody was slightly fast (because he was going off me singing a cappella into my phone to give him an idea of it), but all he had to do was adjust the click and VOILA, THE MUSICAL ALL SHIFTED! Suddenly, the melody was slow enough to sing without tripping over our tongues. MAGIC.

See how we rigged Remi’s posh mic? We affixed it to a wrought iron HANGING LAMP! That’s how we swing in Brimstone Rhine, yo.

BLACK WIDOW’S WALTZ:  I am so excited about this one! Unlike ALECTO! ALECTO!, where it was mostly me singing by myself (with the exception of “Scylla on the Rocks” when Glenn sang with me), much of THE HEADLESS BRIDE SONGS are duets between Remi and myself. Certain “Mockingbird” is one of them, as it’s a bit of a dialogue song, and “Black Widow’s Waltz” is another. We switch off verses until the third, where we switch off lines. He puts on his Sweeney Todd baritone for this one, and it’s a rich scary sound next to my brighter lioness Broadway belt. “Mockingbird” was light fair, and “Loathly” was creepy, chilly, upper register EVIL STUFF, but this is a big, bombastic, ballroom song–very 80’s fantasy movie, like “Legend” meets “Krull.”

THE HEADLESS BRIDE: Don’t you love an EPONYMOUS SONG??? Oh, and I SO LOVED RECORDING THIS ONE, because it’s a call and response sort of thing. Again, Remi and I switched off the call and response verse by verse, until we mixed things up in the 3rd verse, and then just got REALLY WEIRD in the fourth verse. But it makes a HECKUVA GHOST STORY! Very excited about this one!

We ended our Friday session with pizza at Nick’s Pizza on Ascan Avenue. It was past 8 by that time, but we still had a 15 minute wait. It’s the sort of established joint that’s so genuinely good it has the MOST unobtrusive storefront EVER and YET IT OVERFLOWS. Worth the wait though. I had a glass of wine. Much pizza was consumed. It was very calming.

One of Carlos’s favorite things to say to me this weekend was, “¡Tranquila! ¡Tranquilízate!” And then he would hug me.

We started our Saturday off with CHEVALIER. This and the following CAN OF WORMS are the most ROCKIN of The Headless Bride songs. Indeed, of ALL THE BRIMSTONE RHINE SONGS EVER! Hard electric guitar, driving bass, maybe drums (a kit if we can get it, back in Phoenix where Remi is based; if not… MIDI DRUMS!), and those MONSTER METAL VOICES coming on the chorus, you know those really big GROWLY bass dudes that sound like MUPPETS singing OPERA in the PARIS SEWERS? Yeah. Like that. “Chevalier” is about Gilles de Rais being visited on the eve of his execution by the ghost of Joan of Arc, and “Can of Worms” is what happens when you piss off an already pissed of djinn by rubbing its lamp the WRONG WAY. These were super fun to sing, but I did feel (folksy, Broadway-ish, light Italian aria-trained as I am) that I was BOXING WAY OUTSIDE OF MY WEIGHT RANGE.

But that’s what this whole project was about, wasn’t it? Doing something I’ve never done before. Which was only possible because of my collaborators. And patrons. Otherwise, I’m just sitting in a corner singing my weird songs a cappella for an audience of about… oh, 12-20 or so. This includes my mother, some friends on LJ, and any roommates who happen to be trapped in the same room with me…

LAVENDER’S DARLING starts with a MUSIC BOX tinkle and then movies into another CREEPY WALTZY THING. It’s very similar in theme and vein to LOATHLY ONES, but maybe SEXIER, with DISEMBODIED WHISPER ECHOES like will o’ the wisps luring you INTO THE HINTERLAND! Remi and I had a lot of fun recording this one. PLUS IT WAS SHORT. Which made a nice change.

We all went out to eat then at a place called BARE BURGER, where there was this papier-mâché bear’s head mounted on wood (see right) that Carlos wants for his birthday (any birthday, really) (and he doesn’t mind if you, you know, just go in and take it) (just kidding, he’s very honorable) (but he REALLY WANTS THAT BEAR’S HEAD), and ate burgers. Well, I ate one anyone. The boys both had DUCK BURGERS. Because, apparently, THAT’S A THING. Huh.

When we returned, we recorded BARROW BRINE. I’m super fond of this song because I wrote it one morning, just before work, after my awesome friend Samu Rahn (of Cairn) and I had a whole text-message conversation on the nature of “kennings.” We kept making up new ones for the ocean (or recycling old ones). The Salt Meadows. The Phantom Shipyards. The Water Ranges.

I came up with “The Barrow Brine” and was so INORDINATELY proud of myself that I wrote a song. It’s very dirge-y and nautical, and both Remi and Carlos did the choral response part. We’re going to see if my brother Declan might want to chime in back in Phoenix, and layer the voices so we have something that sounds like ONE MILLION VIKINGS singing, or perhaps the Knights of the Round Table, as they send King Arthur off to Avalon in his death barge.

After the songs were done, Remi and Carlos worked on the AUXILIARY PERCUSSION while I faffed around on Facebook. This is a lot more work than I make it seem. I would occasionally glance up and give my opinion. Which I found HIGHLY RELAXING. But it’s just possibly THEY didn’t!

WE WERE FINISHED! All 8 SONGS WERE RECORDED!

Maybe not PERFECTLY but at least INTERESTINGLY, and…

And I just keep telling myself (and being told by my beloveds) that it’s GOOD to make music, even if we don’t know what the HECK we’re doing (me), or even if we know WHAT we’re doing but are forced to do it SUPERFAST (Remi), and that it is what it is, and it’s okay. It’s totally okay.

And I look forward to sharing it with you.

We celebrated by going to a Dr. Who-themed bar called The Way Station in Brooklyn. Remi wore a Batman shirt, I wore a Superman shirt, and Carlos wore a Dr. Who shirt, even though he’s not the RABID DR. WHO FAN in the family (that’d be Remi. And I’m not innocent of Doctor drool myself.) The bathroom was the Tardis. We called it the Turdis. Because sometimes we are all thirteen years old.

I drank a “River’s Red” something something. And Jeremy had a 10th and a Captain Jack. Ahem. Carlos drank a Diet Coke. Designated Driver.