Bat-Folk: A Virtual Anthology Based on the Art of Kathleen Jennings 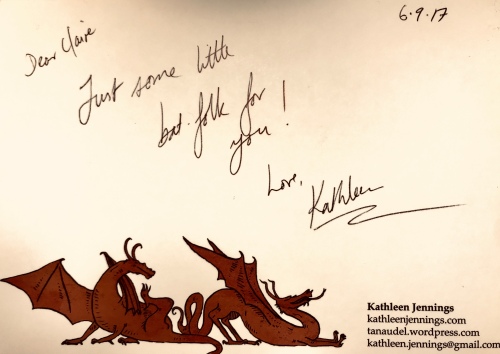 Remember our “Train To Everywhere“? I thought we would try again, this time with BAT-FOLK!

Ever since then, I’ve been meaning to write a piece of Bat-Folk flash or verse, because I love them, because they are ADORABLE! The other day, after those train poems my friends wrote to the photo prompt, I thought, “WHY SHOULD I HAVE ALL THE FUN?”

With Kathleen’s permission, I am posting these pictures. Anyone who wants to write a verse or flash or even just a CAPTION inspired by these Bat-Folk, I will put them up here (with your permission) and Kathleen’s art, all together!

Check out her work at TAUNADEL.

You can also PURCHASE her work at REDBUBBLE. (The scarves alone! The HARPIES SCARVES!)

And NOW, if you wanna play: HAVE AT IT! Flash, poetry, captions, short plays, what have you–in the comment section!

1. bats at the opera

there are bats in the catwalks
they dress in dark coats, and bright dresses
(starched stiffly so they can hang upside down)

arias echoing all around them,
rustling the edges of their wings
until they shift into flight

“Oh, Mr. Bat,” said Mrs. Bat,
A’hanging upside-down,
“Do not you think the night is fine
For going on the town?”

“Why, Mrs. Bat,” said Mr. Bat,
“I love the bright sundown.
It makes the sequins sparkle
On your yellow velvet gown.

I’ll proudly fly beside you
As we promenade the square.
I’ll buy you fruits and flowers
And some moth wings for your hair.”

The missus blush’d to hear him gush;
Her darling thought her fair!
She felt the same about him
In his formal evening wear.

“I long for crunchy katydids!
Let’s call on Mr. Owl.
Perhaps he’d like to join us
On a little insect prowl.”

“My dear, that is a lovely plan!
My stomach starts to growl.
Let’s go before that tiny sound
Can turn into a howl.” 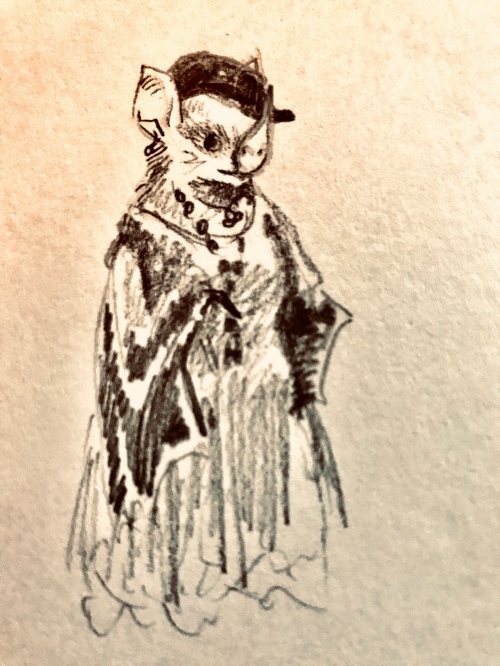 A nice night for a celebration

Bill: Fly awa’ with me and ‘ang fer a bit, missy?
Charlotte: Of all the…! Do you take me for some common lady of the day?! Be off with you or I’ll alert the constabulary.
Bill: You can turn up yer nose at me all ye like, but yer not in this cave by accident. I’d say yer lookin’ fer a bit o’ rough.
Charlotte: You’re close, you loutish oaf, but…
Lizzie: Charlie, is ‘e botherin’ you.
Charlotte: Ah there you are Lizzie, my bit of ruffle. Do you know this masher?
Lizzie: Oh, that’s just Bill. Don’t pay ‘im no mind. ‘E talks a lot, but don’t get nothin’ back.

Alicia Forestall, Countess of Margrave, stepped carefully over the Earl of Annoth, now a brown-grained slug wearing a miniature long-coat and a tiny monocle. The little Earl had been oozing away from the throne for several minutes now, but the pixie on the dais had evidently grown impatient.

Beside Alicia was her husband, Count Fenwick, resplendent as always in cloak and vest, wearing his signature top hat that he still insisted upon, though it was five years out of fashion. She loved him in it, as she loved everything about him.

The Countess did her best to ignore the squeaks, clucks, brays, snorts, hisses, and caterwauls that resounded through the throne room, and bowed before the pixie. She elbowed her husband, who quickly followed suit. The little elf glanced down to his left where the King of Abernia—assuming a fowl could hold that title—strutted in his rooster-sized ermine robe, the scepter of his office clamped in his beak.

“Count. Countess.” The pixie rubbed his hands together. “I have left you to the end for a reason. Alone among your court, you have always been a good advocate for the forest and its denizens. Your stewardship has not gone unnoticed. Therefore I shall bless you with forms that I find most pleasing. You shall have the shape of those creatures who rid the world best of the pests that plague it, who enjoy the dusk when the light is perfect, and who hear the truth echoing from every corner.”

“Yes,” said the pixie, smiling widely. “That is exactly what I mean.”

Poor naked humans
Clothed only in flesh
No fur
No wings
No skirt or shawl
No cloak
No cap
We pity them at nightfall
Shed our raiment to leave for them
Then fly away.

Meet me in the barn rafters at midnight, my love
I’ll bring us a bottle of sweet sanguine wine
We will sip it and sing of the coming feast
When we rise up and trample the folk of the village

Snow scratched with charcoal, the portraits of the bat couple were there for all the villagers to see when they rose in the morning.

Each one was 38 metres in length, a precision that should have had some meaning though no-one could fathom what it might be.

They studied the crochet pattern of the shawl, walking the wool as they hooked stitches, to make their own copies. The hat maker felted stove pipe after stove pipe, crushing the top just a touch, and the tailor stitched ragged cloaks, barely finishing one before it was sold.

The villagers gathered in the market square, dressed in their finery, black pearls around their necks, or linen waistcoats worn correctly with the bottom button unfastened.

And when they glanced themselves in the windows they realised that the charcoal portraits were no installation art, or guerrilla marketing campaign. They were an invocation, to transform, to take to the skies. To navigate by the echo and the leather wing, and one by one the villagers accepted the invitation and, dressed in the finest shawls and cloaks, took flight into the snow choked sky.

When mating season arrived, Lydia would venture out after sunset, carefully dressed in her very best. Once she had attracted an eligible gentleman, they would repair to a nice restaurant; since Lydia refused to wear spectacles, under the impression that they hid her best features, she would simply laugh, hand the menu to her escort, and ask him to select something for her.

It proved to be a most felicitous strategy, since Lydia had borne several children who had grown to successful and independent adulthood. Of course, it was a bit inconvenient, since Lydia had to raise them on her own, but since all the neighboring ladies suffered under the same vexation, she took it as part of the lot of a fashionable bat female.

when last we met, in this
secluded corner of the keep
i faced away, wings splayed
you, sucking me like a fig
i, reimagining your aerials
the formality of the occasion never fails
to stir me, lured by your love sounds
plunging rush of leather, warm sting
back of my neck, all my pearls
trembling, your grip on my thumbs
inexorable

One response to “Bat-Folk: A Virtual Anthology Based on the Art of Kathleen Jennings”