Betsie Withey Brings the Mystery to Westerly: Perelandra and the Living Hat Exhibit

In honor of Betsie Withey’s debut as one of three Featured Artists at the Artists’ Cooperative Gallery of Westerly in July, I asked some of her friends and fans to send pieces inspired by her art, or even just their favorite pictures of themselves wearing her art!

I’ve also, as you will see below, KIPPED DIRECTLY from Betsie’s FACEBOOK ART PAGE ITSELF! With her permission, of course.

Betsie, at ACGOW. “Putting it together” as the song goes.

This friends & fans project–last minute as it’s been–has gone, as you can well imagine, ABSOLUTELY SPLENDIDLY

Of course, much has depended on who was home JUST NOW and at leisure to write me poetry and flash fiction all in a rush, and send me their favorite Betsie flower pictures–etc–but I’ve been very excited about the response so far.

Hopefully, I can keep adding to this blog as they keep coming in! 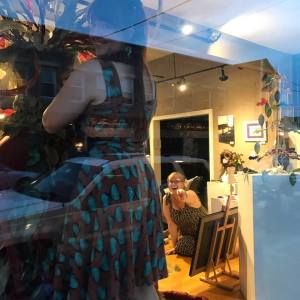 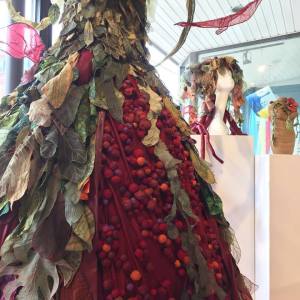 “Perelandra, my large textile art dress is back on display! With a skirt of now 900 free motion embroidered leaves, it is an ever-continuing labor of love.” – Betsie Withey

Betsie Withey creates fiber art, knitwear, and large scale textile art/sculptural dresses and hats.  With degrees in both Fashion Design and Fine Arts, Betsie creates magical clothes and accessories.   Her inspiration comes from nature, including all manner of leaves, flowers, roots, and other organic shapes, as well as from folklore, fashion and costume history. 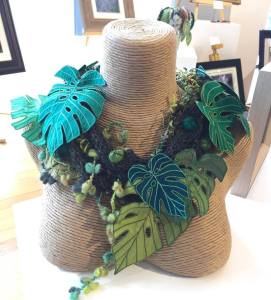 “Here is a design I made specifically for the show: a new philodendron leaf scarf made of all the deep, jewel-toned jungle green silks I could find!” 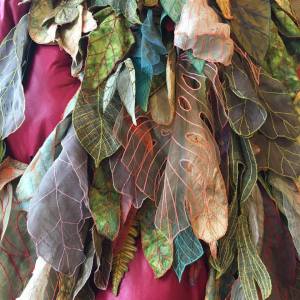 AND NOW,
LADIES AND GENTLEMEN AND NB FRIENDS,
ART INSPIRED BY ART!

Pinch the air, and pull.
The spasming thread between
your thumb and finger is made
of the quiet everyday lightning
alive in every green in the world.
It jumps like a cat by the tail, the thread.
With a flick you toss it into your
open palm, and there, sizzling
with the life you borrowed from life
it settles into the shape of your imaginings:
a leaf-seeming, a flower-not-quite,
fungus-felt bright with its alien reasoning.
None live themselves, for only gods of death
bother with breath. Instead, you make the living
pause, and blink, and remember that
this world that will kill them is beautiful. 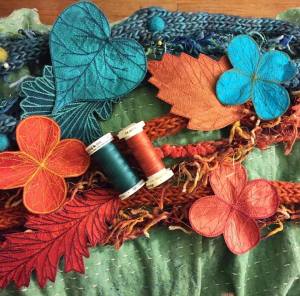 “Sewing embroidered leaves on to scarves. I always love making things in bright colors, but I feel like making something brown and green next. Something with a color palette straight out of an enchanted forest.” – Betsie Withey

OFFERINGS FOR A FAERIE PRINCESS
by Christa Carmen
AKA “Queen of Horrors: Rhode Island”

The girl slipped from the shadows like a wraith, squinting in the sunlight and shrinking back from the first of the revelers to come close enough to bump her, wondering why she’d made the journey into town in the first place.

She affixed a somewhat-smile to her face and stepped forward, if not to mingle with the crowd than at least to blend in with it. The first person to approach her, and comment on the unique Venus flytrap piece she wore pinned in her hair was a young girl, not much more than eight years old.

“What a cool headband? Did you get it here at the festival?”

She shook her head, trying not to scowl. “I did not.”

“A faerie princess gave it to me.”

“No, not a princess. A faerie princess.”

She tried to put some distance between herself and the child, but when she turned to admire some succulents, growing from the spaces between tall wooden slats, there was the child again, stubborn, persistent, inquisitive.

“Could you take me to the faerie princess so that I could get an alien flower for my hair too?”

She sighed. “I cannot. Where is your mother? Shouldn’t she be minding you, keeping you from talking to strangers?”

The little girl looked around. “I think she’s talking to old Mrs. Pennywise. Besides, I’m eight now. I’m allowed to mingle with strangers in the park.”

She was about to comment that she did not imagine this was how childhood worked, when she was granted a view straight across the park, where a tall woman who resembled the child spoke animatedly to a bonneted old lady.

“Where are we going?”

“I’m taking you to see the faerie princess as you desire.”

The little girl hooted with delight, and followed close behind, until they reached the spot where the sidewalk led again into shadow.

“Look down there,” she told the little girl, and pointed into the darkened alley.

“Where? Is the faerie princess down there?”

“She is.” She leaned closer to the little girl, gauging the moment when the child would stray completely into shadow.

The Venus flytrap threaded through her hair snapped up the child, dispensing with her in single swallow.

She straightened, and dusted off her hands.

“Very well,” she said. “It seems I won’t have to suffer the festival long to have found a suitable sacrifice for the faerie princess after all. She will be so very, very pleased. ”

And with that, she gave herself over to the shadows, the Venus flytrap whistling a jaunty tune atop her head.

Praise for Carmen’s OFFERINGS FOR A FAERIE PRINCESS: “It’s sweet. I liked the part where the girl was eaten.” – Carlos Hernandez, author of The Assimilated Cuban’s Guide to Quantum Santeria.

Of Perelandra and the Smile
By Elizabeth Paxson

The days of Perelandra ticked as
hour on hour fine leaves were stitched
Ms. Betsie Withey’s fingers pricked
to bleeding yet the dress took shape
leaf on leaf the form was draped
until her masterpiece was done,
a forest poised as if to walk
in tendriled glory filled the space
while an enigmatic Mona Lisa smile
danced upon the artist’s lovely face
and she replied,
just one more leaf! 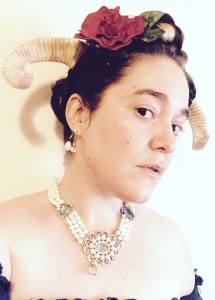 4 responses to “Betsie Withey Brings the Mystery to Westerly: Perelandra and the Living Hat Exhibit”