My friend Jeanine said on Facebook yesterday: “Today is my favorite day! It’s the only day that’s a command: March forth!”

Anyway, I loved that, and it feels apropos to mood of the day. March forth. SALLY FORTH. TALLY HO! &c.

Last week, for Tantor Media, I narrated a book by Susan Kietzman, a local (to me) author whose latest, Every Other Wednesday, will be released in April.

The book’s three protagonists are in their late middle age, somewhat bewildered by (and lost in) their newly emptied nests. They are searching for the next big, best thing–and their quest leads into some dangerously murky waters. The narrative concentrates on the deepening friendship between the three women, and on lessons learned, and on the sudden widening horizons of their lives.

Aaaaaaand . . . TOMORROW AT TANTOR, I get to begin Book 1 of the CAT’S EYE CHRONICLES, by T. L. Shreffler.

The first book is Sora’s Quest, and it is full of assassins and blood-mages and cat-headed swamp people and adventure, plus a really fine mud fight!

I am REALLY looking forward to narrating this one! Plenty of characters growling, sneering, spitting, and defying ALL OVER THE PLACE! Not to mention smoldering, because . . . Well. Sexy assassins!

Also! The author was kind enough to provide a pronunciation guide–which was so thoughtful, and which will come in handy!

Later on this month, I start the second book, Viper’s Creed! I am so looking forward to that next prep script! (In fact, I was so excited about the first one that I downloaded it onto my Kindle before Tantor sent me the prep script. Secondary world fantasy, you know–right up my alley!) 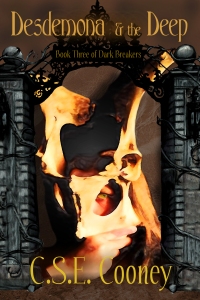 In the meantime, I have FINALLY finished the first draft of Desdemona and the Deep, third and last of the Dark Breakers novellas, after The Breaker Queen and The Two Paupers.

It is, of course, SUPREMELY DRAFTY, and different than I thought it would be. It needs a new beginning, and a better middle. BUT I REALLY LIKE THE END! (Hint: Phossy Jaw Girls GET THEIR OWN!)

And I like that it’s full of goblins, and fashion, and shenanigans, parasite titans and robber knights, pissed-off unions, Gentry Sovereigns, strange forests, transformation, REALLY COOL MAGIC HATS, and bargains: for lives traded away, for lives wasted in excess, for whatever comes next.

March is a kind of big deal month, even setting narrations aside.

This coming Thursday, March 9th, The Savoy Bookshop and Café is hosting Caitlin R. Kiernan! She’ll be doing a reading from her new book Agents of Dreamland, and then I get to be the “Q” of a “Q and A” with her.

Right now, even as I type, I have, like, 7 tabs open about Kiernan–website, Wikipedia entry, LJ, that recent Tor.com review of her book. (Her BOOK! Which I read! And which was delicious, and sick, and beautiful!!! Yum. It’d make a fine wine pairing with Jeff VanderMeer’s Southern Reach trilogy.)

Anyway, I’m excited. CAN YOU TELL??? Here’s the Facebook Event Page for the Kiernan reading/conversation!

THEN! Just after I do pickups for Every Other Wednesday on the following Thursday, I get to go and pick up PATTY TEMPLETON from the AIRPORT!

That’s right, the DREAD Patty Templeton of THERE IS NO LOVELY END FAME is coming to visit ME!

Templeton’s been busy all fall and winter moving from Chicago to Durango, CO and becoming a JOURNALIST for DGO Magazine, where she gets to interview rockstars and dinosaur hunters and dance on stage with JIM BELUSHI!

(And, by the way, she did this FANTASTIC piece on the importance of public radio HERE!)

But now she is MINE! ALL MINE, I TELL YOU!

It’ll be held at the Artists’ Cooperative of Westerly! The Facebook Event Page is HERE.

Gosh, I wanted to write all about this last weekend, but I’ll save that for the next blog! COMING SOON!

4 responses to “March Forth!”